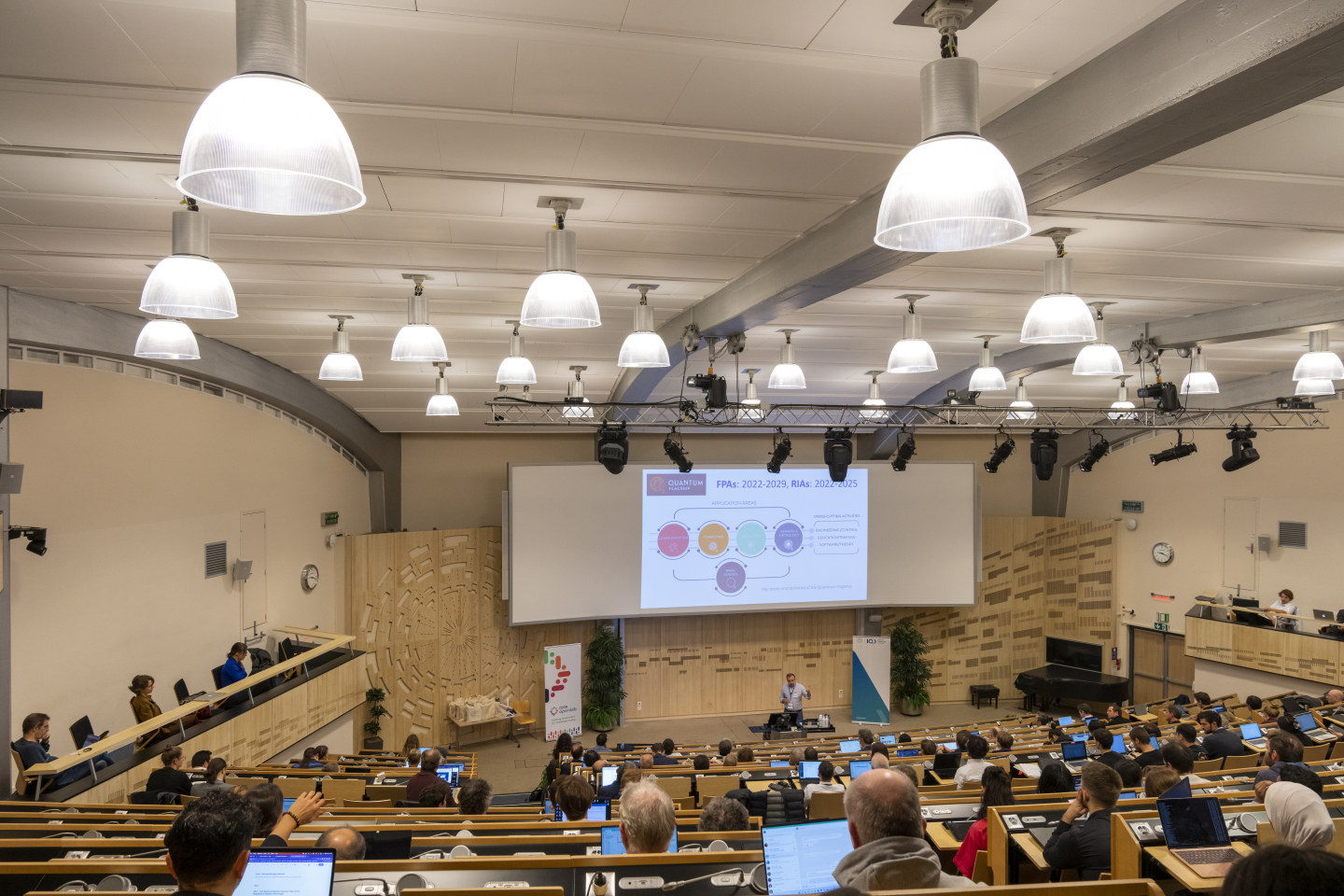 224 people are attending the four-day conference in person, with more following online.

The International Conference on Quantum Technologies for High-Energy Physics (QT4HEP) continued at CERN today. Yesterday’s talks focused primarily on quantum theory and simulation, as well as on quantum sensing, metrology and materials (a summary of the first day can be found here). Today’s talks focused on quantum computing and algorithms, as well as on quantum communication and networks. Technical talks on these topics were given by representatives of the University of Tokyo, Oak Ridge National Laboratory, Barcelona Supercomputing Center, and many other leading research institutes. Recordings of technical talks will be made available on the conference website in the coming days.

The day started with a welcome message from Enrica Porcari, head of the CERN IT department. “Widespread quantum computing may not be here yet, but events like this one provide a vital platform for assessing the opportunities this breakthrough technology could deliver for science,” says Porcari. “Through this event and the CERN QTI, we are building on CERN’s tradition of bringing communities together for open discussion, exploration, co-design and co-development of new technologies.”

Omar also highlighted the role that World Quantum Day – founded in 2021 and celebrated each year on 14 April – now plays in raising awareness around the world of quantum science, including emerging quantum technologies. He thanked the CERN QTI team for their role in coordinating the global calendar of events for this day and for the special symposium organised at CERN earlier this year.

Jay Gambetta, IBM fellow and vice president of IBM Quantum, also gave a fascinating talk today on the path to quantum computers exceeding the capabilities of classical computers. In 2021, CERN became a “quantum hub” in partnership with the IBM Q-Network. INFN and the Italian Institute of Technology have both since joined this “hub”, with the goal of exploring applications of quantum technologies to research in fundamental physics, computational chemistry, computational biology and other related fields.

“Particle physics is a promising area for looking for near-term quantum advantage,” says Gambetta. “Achieving this is going to take both partnership with experts in quantum information science and particle physics, as well as access to tools that will make this possible.”

The day closed with a one-hour networking session, during which 19 posters were presented on the latest developments in quantum technologies. Conference attendees have the opportunity to vote for their favourites, with the winning posters set to be announced tomorrow.

Tomorrow’s sessions – organised in collaboration with CERN’s Knowledge Transfer group – will primarily be dedicated to industrial co-development, as well as presentations related to education and societal impact. Friday will be dedicated to hands-on workshops with three different quantum computing providers. Friday’s sessions will not be webcast, but most sessions tomorrow will be.