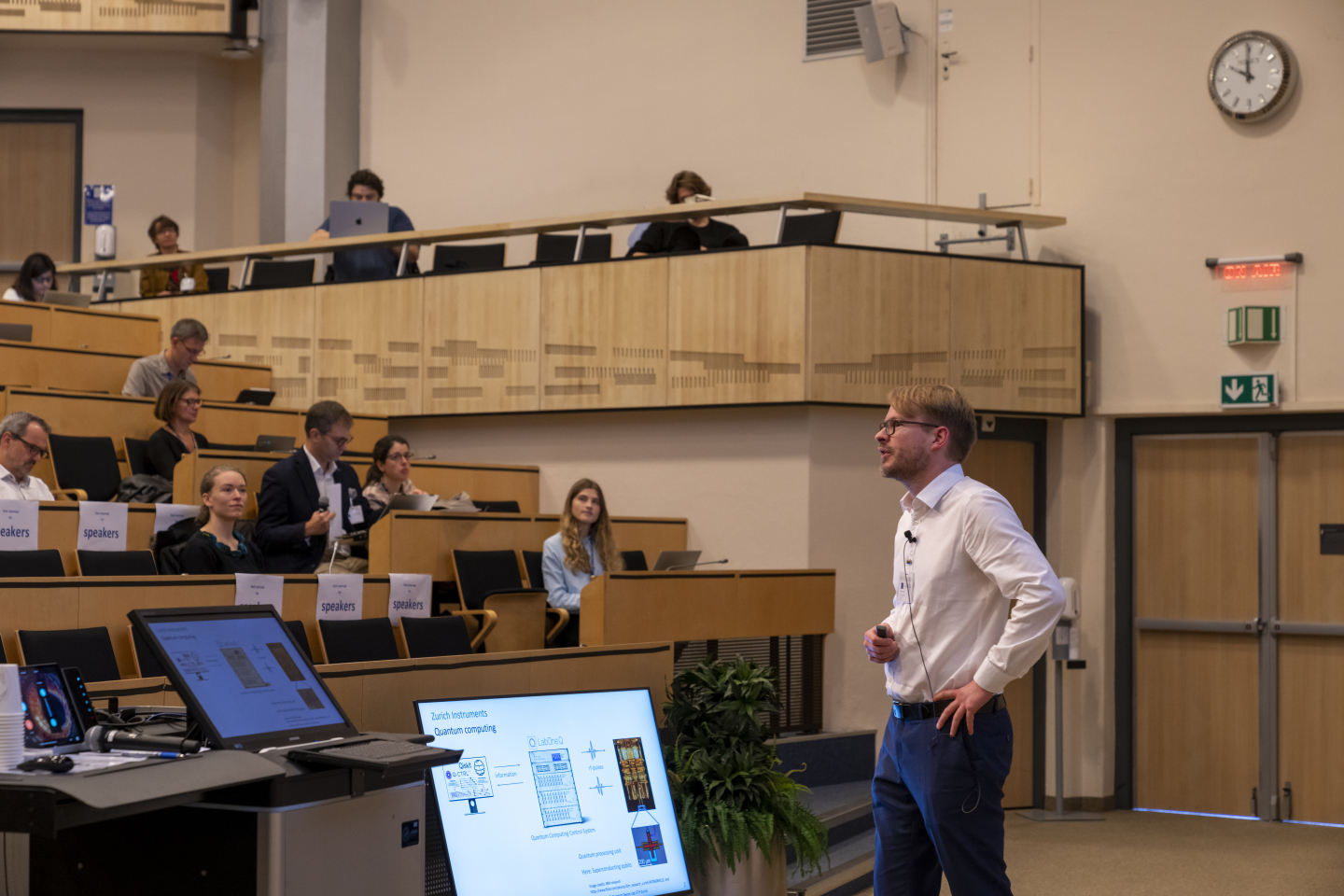 Thursday’s sessions of the QT4HEP conference were dedicated to co-development with industry.

Today was the third day of the International Conference on Quantum Technologies for High-Energy Physics (QT4HEP) at CERN. Today’s sessions – organised in collaboration with CERN’s Knowledge Transfer (KT) group – were primarily dedicated to industrial co-development. Many of the extreme requirements faced by quantum technologies are shared with particle physics, such as superconducting materials, ultra-high vacuums, precise timing, and much more. For this reason, CERN has built up a wealth of expertise and specific technologies that can directly address challenges in the quantum industry. The CERN KT group strives to accelerate innovation and maximise the impact of CERN technologies and know-how on society in many ways: it provides advice, support, training, networks and infrastructure to ease the transfer of CERN’s know-how to industry and society.

“Our focus is to see which technologies at CERN might help to build robust quantum computing devices,” says Han Dols, Business Development and Entrepreneurship Section Leader, in the CERN KT group. “Already, the White Rabbit technology has found its way to the quantum community and we believe there is more CERN know-how that can help Europe in its quantum ambitions.”

Part of the day was dedicated to education, training, and outreach initiatives, as these are also important aspects of CERN QTI. Google provided financial support for 11 students to attend the conference. Many students and researchers presented posters at the conference. Conference attendees voted for their favourites among the 19 posters presented, with the three posters from DESY scoring highly, along with posters on quantum computing applications at LHCb, IBM quantum platforms, and noisy quantum gates.

Today’s programme also featured a presentation by Marieke Hood, Executive Director for Corporate Affairs at the Geneva Science and Diplomacy Anticipator Foundation (GESDA), on the recently announced Open Quantum Institute. CERN is part of a coalition of science and industry partners proposing the creation of this institute, which will work to ensure that emerging quantum technologies are put to use to tackle key societal challenges. The proposal for this institute is made through GESDA in collaboration with leading research institutes and technology companies. Other founding supporters of the Open Quantum Institute include the University of Geneva, the Swiss Federal Institutes of Technology in Zurich (ETH) and Lausanne (EPFL), Microsoft and IBM. The proposal was launched at the 2022 GESDA Summit. During an address at the event, CERN Director-General Fabiola Gianotti highlighted the potential of quantum computing – and other associated quantum technologies – to help achieve key UN Sustainable Development Goals.

“The OQI acts at the interface of science and diplomacy,” says Hood. “It will support the quantum community to tackle use cases supporting the UN Sustainable Development Goals and prepare the multilateral governance we’ll need to ensure the technology benefits are equally distributed once quantum computers are mature and at scale for real-world applications.” She continues: “We’re proud to count CERN is a key partner for OQI, its experience of multinational collaboration will be most useful to help us achieve these ambitions.”

In parallel, a two-day meeting of the “Quantum Computing 4HEP” working group is being held today and tomorrow in the CERN Council Chamber. This invitation-only workshop, organised by CERN, DESY, and the IBM Quantum Network, is a kick-off event for this new working group, which seeks to accelerate the journey to quantum advantage for particle physics.

Tomorrow, the QT4HEP conference be dedicated to hands-on workshops with three different quantum computing providers. These sessions will not be webcast.

You can also read about the Tuesday’s and Wednesday’s sessions from the conference on the CERN QTI website.