Project goal
The goal of this project is to explore the feasibility of using quantum algorithms to help track the particles produced by collisions in the LHC more efficiently. This is particularly important as the rate of collisions is set to increase dramatically in the coming years. 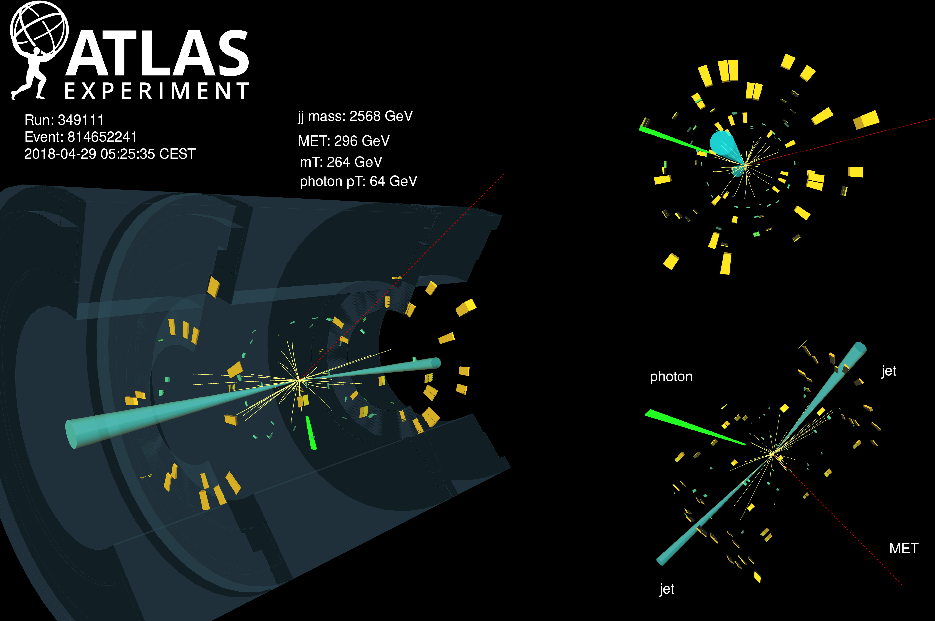 Project background
The LHC at CERN is producing collisions at unprecedented collider energy. The hundreds of particles created during the collisions are recorded by large detectors composed of several sub-detectors. At the centre of these detectors there is usually a tracker detector, precisely recording the signal of the passage of charged particles through thin layers of active material. The trajectories of particles are bent by a magnetic field to allow the measurement of the particle momentum. There is an expected ten-fold increase in the number of tracks produced per bunch crossing after the high-luminosity upgrade of LHC.

Classical algorithms perform the reconstruction of the trajectory of charged particles; these make use of Kalman filter formalism. Although they are quite accurate, they scale worse than quadratically with the number of tracks. Several ways are explored to mitigate the increase in the computing needs, such as new detector layout, deep-learning and code parallelisation. Quantum computing has been shown to provide speed-ups for certain problems and different R&D initiatives are exploring how quantum tracking algorithms could exploit such capabilities. We are developing a quantum-based track-finding algorithm aimed at reducing the combinatorial background during the initial seeding stage for the Kalman filters. We are using the publicly available dataset designed for the Kaggle ‘TrackML’ challenge for this work.

Recent progress
We have developed a prototype quantum graph neural network (QGNN) algorithm for tracking the particles produced by collision events. The model uses a graph interpretation for trajectory reconstruction by representing detector hits with nodes in a graph and segments among hits as graph connections. The quantum model is based on cascade hierarchical classifiers, identifying nodes and segments belonging to particle tracks.

Several architectures have been investigated, ranging from tree tensor networks to multi-scale entanglement renormalization ansatz (MERA)  graphs, and the results were compared against classical graph neural networks (GNNs). We studied the way in which both quantum effects, such as entanglement and the expressibility of quantum circuits impacts the final performance. In addition, a student project during the summer focused on the design and optimisation of a hybrid approach to data embedding, combining a classical multi-layer perceptron to a quantum circuit. The results were presented at several international conferences and workshops, including Connecting The Dots 2020 and IOP Quantum 2020.

In parallel to the high-energy physics use case, we also started investigating the application of this methodology to the collision-avoidance systems used for commercial air traffic.

Next steps
This work represents a first complete look at particle track reconstruction using QGNNs. Our results show that the prototype can perform at a similar level to classical approaches. We have also learned about how scaling the network depth can improve its performance. However, it is known that there are many obstacles to the efficient training of extended QGNNs. Therefore, we are currently maintaining a conservative attitude towards the advantages offered by such networks.

Our plan is to improve the model by introducing better strategies for encoding information. We will also continue the analysis of the properties of the quantum circuits, in order to avoid the problems typically encountered when training hybrid models, such as the effect of vanishing gradients.